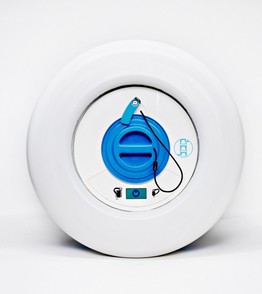 The Passive Vaccine Storage Device from Global Good stays cold for more than a month.Let's take a minute to praise drip tape. You can find it at your local gardening center—thin, perforated plastic strips that deliver water directly to a plant's roots. Drip tape is one of the biggest advancements in farming of the past 80 years, radically reducing the water industrial farmers need and enabling our food supply to skyrocket. We take it for granted because, like many great designs, it is so simple and commonplace. But it depends on a pressurized water supply. Millions of farmers in the developing world, where drip irrigation is impossible, must carry water cans on their backs—painful, scarring labor.

But in 2009 a small design startup, Proximity, launched a gravity-fed drip system. It's not much more than a huge PVC-canvas bag raised a few feet off the ground. The design hinges on a novel water filter that cleans out dirt and grit without sapping water pressure. Proximity's system cuts water usage in half, increases yields by a third, and costs just $65. The device enables a single woman to tend a larger plot by herself. Her children can thus go to school instead of farming. Thousands of farmers in Myanmar have bought them.

Contrast the success of the Proximity system with the disastrous PlayPump, a merry-go-round that pumped water while children played on it. By 2008, Roundabout Outdoor, a company with backing from the US government, had installed more than 1,000 of these $14,000 devices across Africa, often at the expense of existing wells. Unfortunately, the math suggested that kids would have to play 27 hours a day for the PlayPump to provide enough water for those it served. Today most of them lie fallow, rusting monuments to good intentions married with half-baked design.

Over the past few years, design has become a crucial tool in helping the developing world. And that makes sense. After all, designers aren't just obsessed with fashion and form—they are trained to articulate people's needs and desires and to build devices we will actually use. In the US, that can mean creating products that solve even the tiniest daily inconvenience, rely on our abundant infrastructure, and appeal to our relative wealth. But those conditions don't apply to the world's poorest. So if you're going to help the developing world, you can't just airlift in supplies we use in the rich world. You need to deeply understand how the people there live, then design things that make sense for their specific conditions.

This trend has its roots in the early 2000s, when business writer C. K. Prahalad challenged the then-dominant view of the world's poorest people as charity cases who would gratefully use anything they were given. Instead, Prahalad saw the developing world as an unaddressed consumer market filled with individuals making tough choices to satisfy their needs. A mother in India facing a trade-off between medicine and cell phone minutes is every bit a consumer—but her dilemmas are profound, and thus the products aimed at her need to prove their worth unambiguously.

We can still be naive about the many challenges involved in making a product succeed in the developing world. But designers in recent years have become more exacting about the delivery and sustainability of devices and services. What follows are some of the most inspiring projects in development, including a light for treating infant jaundice that offers treatment at 10 percent of Western costs, a thermos that can deliver vaccines to the most remote places in the world, and a cholera ward that stops infection from spreading simply by treating its own water. These are the kinds of innovations that can help people today—and will lead to even better-designed solutions tomorrow. 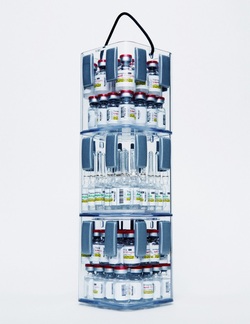 A Constant Log
Spoiled vaccines don't necessarily look spoiled, which is why vaccine refrigerators in the West often log their temperature history. This one keeps track of how often the lid is opened and records temperature and GPS data, which can be downloaded via USB or relayed via SMS.

Efficient Retrieval
Inside are vials for 300 inoculations loaded onto 12-inch trays that come in interchangeable sizes to suit different vaccine configurations. They're reachable through a 5-inch opening: 95 percent of hands can fit through it, but it's still small enough to limit warm air from flowing in quickly.